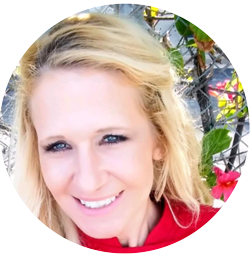 Vanessa is a good example of how an addict or alcoholic can completely turn one’s life around with recovery. Once she came to House of Hope and immersed herself into the program, her life was transformed. She now bubbles over with enthusiasm, direction, and pride, giving back to others what she learned at the House.

The first part of Vanessa’s upper middle-class, suburban life was stereotypical and happy. However, a feeling of not fitting in lurked in the background. During her high school years, her parents divorced, she became pregnant and began living a party lifestyle. Alcohol became her primary focus. A few years later, her mom committed suicide. Hanging on by her finger-nails, Vanessa worked part-time selling cars, an occupation that encouraged her alcoholism. She was soon pregnant again, this time with twins. She always tried to hold her family together, believing meth helped give her the energy she needed to do this, but her disease soon became bigger than she was. She lost custody of her twins to their father and was living in her car with her oldest daughter, went in and out of jail, and was finally imprisoned in October 2017. There she began working in the kitchen, a job which would lead to a future career, although she didn’t know it at the time. She began to get glimpses of a higher power and a way out of her messy life.

In a prison treatment program and wearing an ankle-monitor, Vanessa heard about House of Hope. Although she didn’t know anything about the House, she knew she had to get there. Every day she called to get admitted even though she was told that no one still in prison had ever been accepted. After her release in February 2018, she was admitted to HOH and went to Recovery Bridge Housing in March. In the beginning she had a hard time following the rules, but she took part in everything she could. She learned coping skills, relapse prevention, self-love, and how to transition back into society. She felt privileged to be at the House. She knew it was a different experience than that offered by other treatment centers. Despite other family members thinking she would never make it, her oldest daughter stood behind her for the entire journey and Vanessa graduated in July 2018.

Today Vanessa has two years of sobriety. She has a car and her driver’s license, works as a chef at Torrance Memorial Hospital, sponsors other women at the House, and has enrolled in school hoping to become a chef at a treatment center. She wants to give back that which has so freely been given to her. But life hasn’t been all roses. Sadly, her boyfriend recently relapsed and died, but Vanessa knew what she must do. The day after his death, she went directly to the morning AA meeting at the House and surrounded herself with the love and support she knew she would receive there. Despite the challenges she faces today, she says her life “is a thousand times different” and she knows she is going to make it.